If you remember, the Ridgeline tour is not about traveling but reconnecting and having great experiences with friends and family.   I have an extremely small extended family, one uncle and two cousins.  The Uncle and one cousin live in Oxford, England and the other cousin lives in Rome, Italy.

The cousin in Rome Italy needed help getting her small children, 4 and 6, to Oxford, England to see their grandfather, my uncle who is fading.  Lori and I agreed to help her get her children to and from England.   And, we planned see other friends and family as well.

Mid June gives you a good chance to see England at its best weather wise.  The sun was out along with the flowers, leaves, and people. The Cotswolds are idyllic and there we visited second cousin, Hugh, and his wife, Rosie.  The have a large rambling home with 4 golden retrievers and 14 horses.  We had a fantastic time visiting over a dinner of Welsh leg of lamb.

Hugh, by the way, is the most interesting man in the world having commanded a tank battalion in West Germany, appeared in the movie, “Indiana Jones and the Last Crusade”, played in a rock band and is currently a successful photographer  recently shooting the Royal’s playing polo.

I got to play two great golf courses, Minchampton and Oxfordshire with Hugh and my cousin, Simon, respectively.  My uncle, Peter, helped found Oxfordshire, so Simon and I were able play.  They still have a plaque commemorating the opening and a tree planted for my uncle. 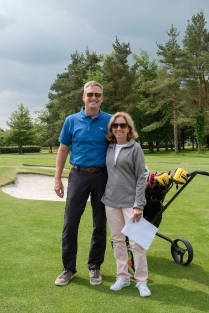 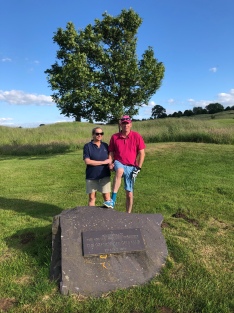 Did we see some sites, yep, plenty of them but it’s way more fun to see them with your family and friends even if they’re 4 and 6 year olds who speak Italian.  Despite the best efforts of the Fiumicino airport to foil our plans, my persistent cousin, Alison, made sure we got there and back.  By the way, the funnest way to learn Italian but not the best is to have a 4 year old girl be your teacher.

To accelerate my learning of golf, I have decided to do a golf marathon.  Read the next post to see how that goes.

One thought on “Staying True to the Tour”