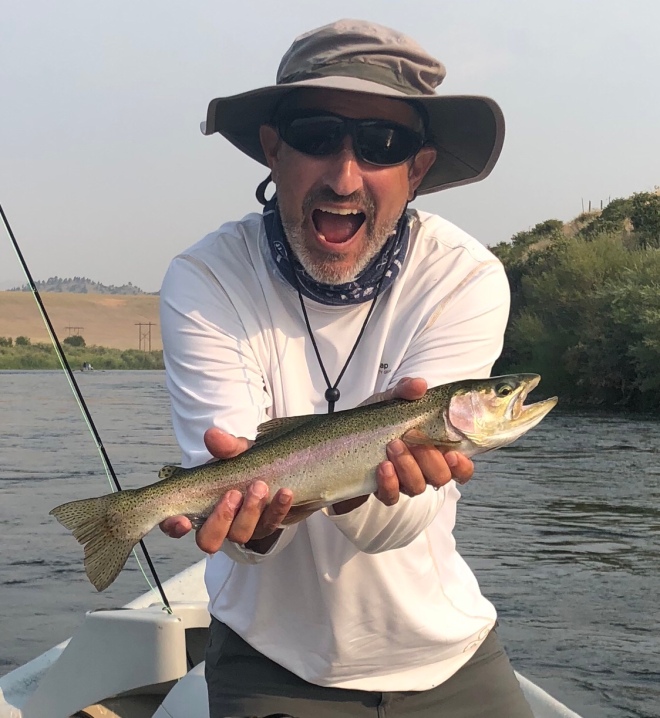 I had the wonderful opportunity to officially join in on the Ridgeline Tour in early June 2018 with my awesome “fishing and life guides” Slim and “the good doctor” Pat McMahon. Fishing Central Pa at Spruce Creek and Rolling Rock with these guys is an over the top experience – we caught more big trout and had more belly laughs than is humanly possible. Don’t get me wrong, I’m not complaining, but the only thing that was missing was the experience of riding in the Ridgeline. This trip, Pat and I had our own cars cruising behind the esteemed Ridgeline, just dreaming of how nice it must be to have a truck that pretty much drives itself.
For years I’ve been hearing about how Jim had “pimped out” this awesome truck for adventures far and wide. To be honest, I was jealous. The “truck” looked awesome in the parking lot at Rolling Rock, but what I was really looking forward to was how it would perform out West in ‘Mantana’ with it’s integrated rod holders, comfy chairs for putting on waders, awesome stereo, cold beverage holders, etc, etc, Slim thought of nearly everything.
Fortunately I wouldn’t have to wait long, as my “fishing and life guide” invited me to join him on two trips out west. The first was in July with Dr “Scoop” Simmons (see blog below), starting in beautiful Mackay, Idaho and working their way up to “trout heaven “ Mantana. Unfortunately my hectic work schedule kept me from joining the boys on that trip, but the good news is that I was able to rejoin “the Tour” on the next western leg, set to begin on August 13th. Finally a chance to ride with “The Big Dog” in the pimped out Ridgeline!!!`
After many sleepless nights, filled with anticipation, the 13th finally arrived. Due to “faulty” rear sensor the Ridgeline had spent a few weeks in a Bozeman body shop (presumably to add more creature comforts) and although it wasn’t quite polished enough for pick up on the 13th, it was guaranteed to be ready on the 14th when we were scheduled to fish the epic Madison river, with high hopes of re-catching Chet’s “Bill Buckner” brownie.

On this leg of the tour we were honored to be joined by fellow yinzer and the originator of “the trout-about” Pete “trico” Perkins. Together, Pete and Slim lined up the best water, guides, hotels, restaurants, etc,etc for a truly epic leg of the tour. Life is truly good when you are with these guys! 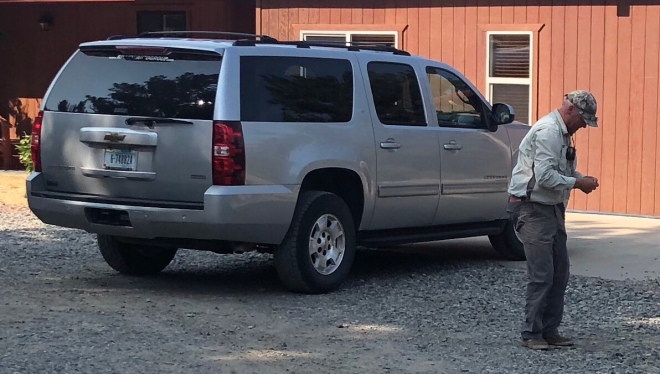 Following the unparalleled chicken dinner (and multiple shots of moonshine with the bartender) at “THE BEST BAR” in America (and closest to my cabin) the Gallatin Riverhouse , we received the unfortunate news that the Ridgeline wouldn’t be ready until the afternoon of the 14th. This meant that we would have to slum it in my dirty old Suburban (without the rod racks), but just for the day. Unfortunately, that day on the Madison was a disappointment, not sure if it was the guides, the weather or the fact that we were all missing the Ridgeline, but Chet’s big brown trout (and his buddies) were able to avoid our flies. Collectively we did catch many trout, just not the bounty we had hoped for. 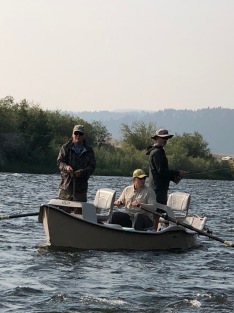 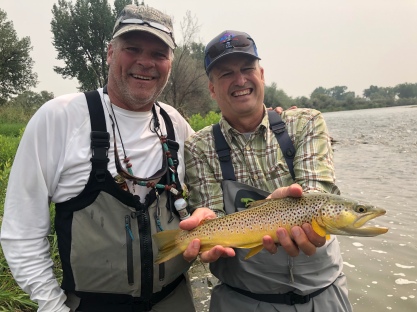 The next day was scheduled to be a travel day. I got 2 weeks of work done while the retired guys (Slim and Perk) explored the expansive Buck Ridge in the ATV. 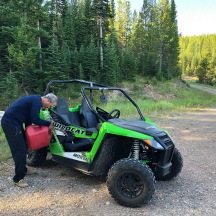 Around noon we packed up the now clean Suburban and headed to the body shop to finally pick up the star of the show. Once in cell coverage , we received the unfortunate news that the truck was delayed at the Honda dealership…”oh my, how can this be happening”. Ironically, the man who literally invented the network of tying insurance companies with body shops and parts distributors to streamline the whole process of automobile repairs was now being tripped up on repairing his own vehicle . This irony probably would have sent the old Slim over the top and down the throats of anyone involved in the mishap, but the new, improved (nose job) and retired Slim took the news (mostly) in stride. After transferring some precious gear from the parked Ridgeline into the same old standard “Mantana Suburban “we were on our way up North to fish the Mighty Missouri River.

(Side note… Perk and I had an interesting talk with the service technician who let us know that the delay was due to the fact that Slim had requested that the rear sensor be reprogrammed to prevent the Ridgeline from getting into accidents while traveling 35 mph in reverse, into guide trucks traveling 50 mph towards him. Not an easy programming task, but one they could handle in Bozeman, albeit with a bit more time. The tech also told us that we’d be much safer in the Montana friendly Suburban, as there are all kinds of bounties out to get all Ridgelines off the roads. She said it was because they technically are not considered “trucks” out west, and she was right… we never saw another Ridgeline, anywhere, including dealership lots.) 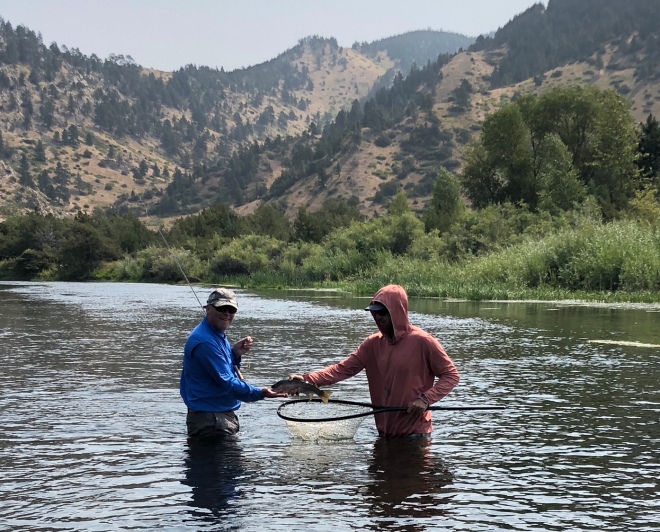 Any way, “the Ridgeline Tour” must go on (too hard to rename the blog?) and on we went to experience The Mighty Mo, outside of Craig, Montana. Sweet singing Pete Perkins (a legit recording artist) set us up with the guide above all guides (Bryce Connery), accommodations and libations that all exceeded expectations. The fishing was extraordinarily and true to the rules of fishing with Slim, we led him to believe that he caught the biggest fish all 3 days. 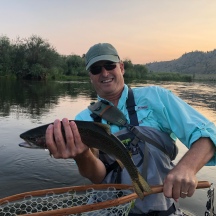 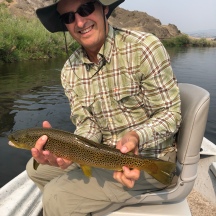 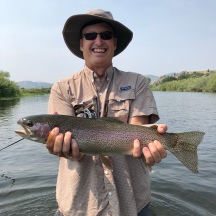 The only disappointment was that we didn’t have the Ridgeline, but fortunately the old and faithful Suburban was an adequate (and safe) mode of transportation, made significantly better with the addition of Slims various Spotify playlists.
I’m still hoping that someday I’ll get to ride in that beautiful “truck” (featured in the infamous holiday card), but then again I’m going to check in with the bounty hunters to make sure it’s still not on the list!!!
Delighted to be on “The Tour”, honored to be a guest blogger and anxiously awaiting our next adventure! Nobody does it better than you, my brother!!!